Is Your Cat Crazy? Solutions from the Casebook of a Cat Therapist
Winner! 1995 Best Instructional Nonfiction Book
--Cat Writers' Association
The Dog Who Would Be King: Tales and Surprising Lessons from a Pet Psychologist
A top expert takes you deep into the minds and emotions of dogs.
Ain’t Misbehavin’
Has helped more than 50,000 households cope with crazy cats and dysfunctional dogs!

The Dog Who Would Be King: Tales and Surprising Lessons from a Pet Psychologist

A Selection of the Book Of The Month Club

From Publishers Weekly
What would you do if your dog was terrified of your new lover? Or if she ate her way through your new kitchen cabinets to hide from a thunderstorm? Applied animal behaviorist Wright's (Is Your Cat Crazy?) latest book tells how he helps exasperated owners solve these and other shaggy dilemmas, including the dog who left "voodoo" drawings on his owners' white carpet while they were away at work and the family that couldn't eat at home because their German shepherd would swipe their food from the table. Wright also covers more ordinary cases of doggy phobias, separation anxieties and aggression. In between cases histories, Wright donates valuable advice on topics such as choosing and training puppies, merging pet households and reading your hound's body language (hint: not every wagging tail is friendly). Best of all, Wright demonstrates inspired, and sometimes humorous, insight into the motives of mischievous canines and their befuddled owners.
Copyright 1999 Reed Business Information, Inc.

From Library Journal
Wright, a professor of psychology and certified applied animal behaviorist, shares entertaining stories about misbehaving dogs from his personal case histories. Meet King, who wouldn't let his owners get out of bed at night. Then there's Wizard, who was so worried that his owner would abandon him that the owner had to leave for work every morning through the bedroom window. After 16 years of making house calls, Wright has learned to know the families and their lifestyles first before analyzing...  the dog's problem. This is not a "how to" book, the treatments described are all custom-tailored for one particular animal in its home. Instead, Wright focuses on altering behavior rather than the pet's personality. Drawing from his experiences, he provides insight on topics such as coping with puppies and new dogs, the right and wrong ways to discipline a pet, and specific canine behavioral problems like aggression (biting) and phobias (fear of thunderstorms).
Copyright 1999 Reed Business Information, Inc.

Excerpt from Chapter One:
My friendly knock was greeted by an ominous, throaty growl. This was not the "doorbell bark" of the average pet. This was the growl of a dog with an agenda.
I get your message, buddy, I thought uneasily, and I really, really hope you're on a leash. I heard footsteps approaching, but no one was telling this dog to lie down or be quiet.

But that's why I was here. The dog was in charge instead of the owners, and I was supposed to turn that around. I hoped my uneasiness wouldn't show. After all, I was the professional "dog shrink" these desperate people were counting on to help their angry canine. I couldn't let them see that the beast scared me before I ever laid eyes on him.

Although my animal behavior practice at the time was fairly new, I had dealt with aggression many times. Usually, when I made a house call, the dog in question was leashed, crated, or in another room. Or the aggression problem wasn't linked to the dog being overly protective--it didn't go berserk when people came to the door.

So it had always been my habit to say hello to the client, shake hands, and sit down to start the session. I had never been attacked--so far. I hoped my luck hadn't run out on the doorstep of this modest bungalow in suburban South Carolina.

When the door to the Farley house opened, I came face-to-face with what turned out to be the most controlling dog I'd ever encountered. The young male German shepherd stationed himself just inside the door, barking, growling, and staring boldly into my eyes. His trio of owners stood placidly off to one side in the small entrance hall, and I quickly noticed two things that made my growing feeling of alarm even worse.

The first was that Janet Farley, her husband, Tom, and her brother-in-law Carl all sported a number of wounds in various degrees of healing on their wrists and ankles. The second was that nobody had a hand, much less a leash, on the dog.

"This is King," Janet stated without preamble. "Come on in before he gets you." The two men standing behind her chuckled nervously, King kept growling.

I moved my briefcase from my side and positioned it between me and King. Canceling the planned handshakes--almost certain red-flag attack signals--I greeted my clients with as much enthusiasm as I could muster and stepped slowly and carefully into the malevolent canine's kingdom.

King's body language told me everything. After years of studying dog behavior, I didn't need a textbook to recognize the classic signals of an animal who was about to lose control. If I didn't stoop or squat down immediately to defuse my threatening position at the door, I was fairly certain King would attack. So down on my heels I went.

Dogs can do a bunch of things with their bodies to tell you to back off before it's too late. And King was doing just about all of them. For starters, his tail was held high, swishing slowly back and forth. Lots of dog bites are accompanied by tearful kids exclaiming, "He was wagging his tail!" It's important to know what a dangerous dog looks like, and there's a key difference between a warning swish and the typical exuberant wag. If people don't want to get nailed, they'll respect a dog's communicative displays.

King's ears were rotated toward me. His mouth was puckered with his lips brought forward--the opposite of the typical smile face of the calm canine. His weight was on his front feet, and he continued to stare challengingly into my eyes as he revved up his throaty growl. His nose was pointed directly toward me, so it appeared that his erect tail was growing out of the top of his forehead. All of these signals told me that King was in a highly aroused state and that my best move was to stay low and still. 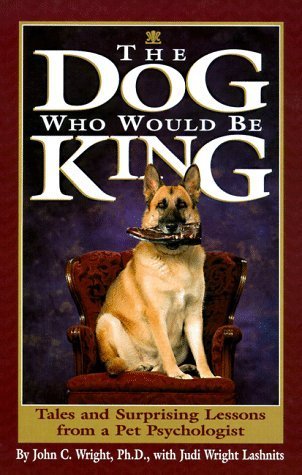